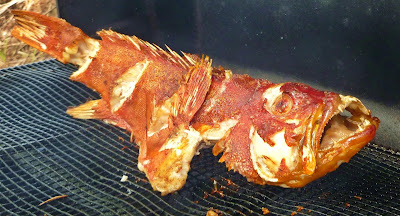 Red Grouper (Lyretail)
Wednesday nights are burger nights at the Olivas household. I grilled up some Motsiyas Burgers. You can see that post here. But I also grilled some grouper and shrimp and that's what this post is all about.
Many of you know I love to go fishing. Our last trip out to the southern banks of Guam, we did pretty well. Most of the fish went to the local market. But every fisherman also takes home a bucket of fish. That amounts to about 30 pounds. My wife Lupe and I are big fish eaters. Here is a photo of my take-home fish.. 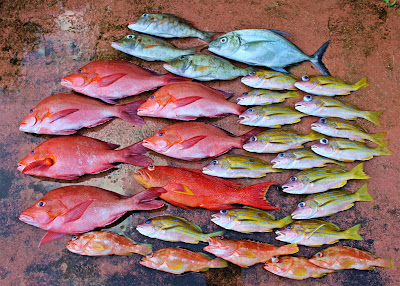 I decided, with Lupe's recommendation, strongly I might add, that I would BBQ that nice red grouper in the middle.
Here is a better picture of it.

Red Grouper (Lyretail Grouper)
It would be plenty for us. It's about a 16 inch, 3 lb. fish. It would make a nice meal.
My grandson Jacob was over and he did the cleaning honors. I cut two diagonal slices on each side of the fish, just so the lemon and lime could penetrate better as well as the sea salt.
I cut up some coconut branches to lay on the grill. This is a local non-stick method used for fish. Grilled the fish for about 45 minutes over medium heat on my wood-burning BBQ pit.

At the same time that I was grilling the grouper I was also grilling some marinated shrimp. I marinated the shrimp for about 4 hours using calamansi lemon, lime and orange juice, canola oil and salt and black pepper. This was kept in the refrigerator until time came for it to be grilled. 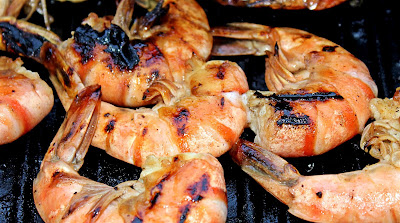 Marinated grilled shrimp.
After slaving on the pit for about an hour, it was all served up for my wife Lupe. I still held out in order to eat my Motsiyas Burger first. Then I had a little fish and shrimp. 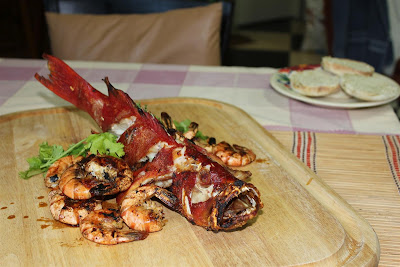 Here is the spread for Lupe.
With this Lupe ate boiled banana in coconut milk as her starch (super delicious) and the thick, corn tortillas made locally.
Here is a picture of the aftermath.... 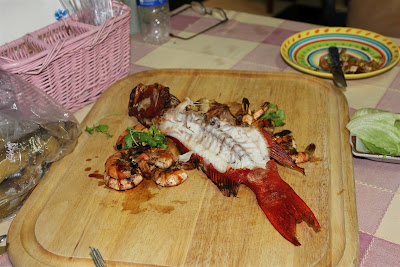 Well needless to say, we were all happy campers who ate more than we planned on. But it was so good we couldn't help ourselves.
Looking forward to the next BBQ. That would be tomorrow. I have chicken in the refer all thawed out.
Until next time....
Posted by Rueben at 8:30 AM

Looks great Rueben. I am going to try the next time I can get whole grouper at the store. I obviously don't have coconut branches around here. Do you think the fish would do well right on the grate? Maybe on indirect heat?

Thanks Bill. Regarding the grill, if you have a good non stick such as cast iron, the fish will do just fine. Oil down the grill and oil down the fish with your favorite oil. That is what I do when I just want to grill the fish right on the grill. Or, if available, any green and clean branch will do.

Regarding the heat, because I use a Santa Maria style grill, I can roll it up or down so I don't need to grill indirectly. But I have on other grills. So it will depend on what type of grill you have. As you know, every grill is different. But it really is an easy cook. About 20 minutes per side, depending on the size of the fish. I know you got this!!! Hope you try that citrus marinade. Really good. I add a little salt in the marinade. But I salt to taste at the end of the grilling.

Hope you have an opportunity to try it out. Like you said, it's always good to try something different.

Grill on my friend!!

Thanks for the tips Rueben. I really love seafood on the grill. It just brings out a great flavor, especially with the right marinade/seasoning.

As a matter of fact, I am about to throw some Orange Roughy on the grill right now. Olive oil, oregano, thyme, basil, S&P. Something simple...

Thanks you Bill for the particulars on your Orange Roughy prep. Definitely going to try it this week, weather permitting.
(:{