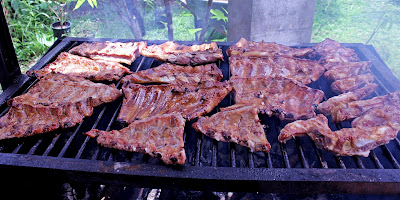 Being in the semi-retirement mode has it benefits. Even my wife Lupe is cashing in on that action.
Here's the story. Lupe works for one of the local elementary schools, Harry S. Truman here in Santa Rita (Guam). As school was getting closer to the beginning of the new year, all hands have been on deck to clean everything up, give the school a new paint job and all else that goes with readying the school for the new year.
Well this past week all the employees brought in pot luck food to feed all the volunteer workers that were not employees of the school. She told me about 10 persons total from the outside. Well, I get this semi-frantic call from Lupe about 8:30 in the morning, about an hour after she left for work. She said that they had a whole lot more volunteers show up than was anticipated. A whole lot more. She asked for my help. No problem, what can I do, right?? Lupe says I need for you to BBQ!! Ahhh, that may be a problem!! I have no nothing on hand to feed the multitudes. She said and I need for you to BBQ Spare Ribs. Oh yeah right!!! Ha, even better yet. I asked her what time is feeding? Lupe says 11:30am. Great, that would mean that I would have to go to the store, buy a case of spare ribs, which will be frozen, come home, defrost them, prepare them, season them, build a fire, grill them and have all that ready by 11:15 so that she can deliver them to the school in time for lunch. Oh yeah, no problem I told her. Just be here to pick them up. I will try my best. Small order...right??
Well, I went to the store, which is 10 minutes away, and bought the case of ribs. Returned home, put them all in the sink filled with water, and defrosted the ribs. Not my #1 choice of defrosting meat, but in a pinch it works just fine. Remember, just like the old days when we didn't know any better. No one died or got sick back then. At least no one I know.
Anyway, while the ribs were defrosting in the sink, I went outside, cleaned out the ashes from my Santa Maria-style BBQ pit from the last BBQ and started the fire with a small bag of Match Light Charcoal. It's the rainy season on Guam and I had a lot of wet wood. But I had some dry stuff, though not enough for the BBQ. That is why I will use the Match Lite as a starter. Works great to start up wet wood, as it did on this day. I loaded up the pit with small kindling on top of the Match Lite and placed my dry stuff with a little of the wet wood on top of that. After about 10 minutes of burning it was all a go. 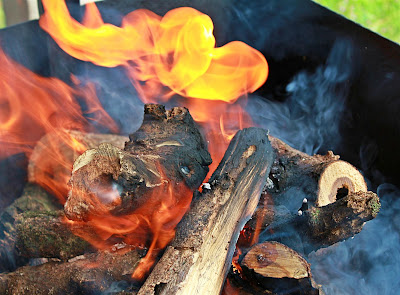 I went back inside, and started trimming the rib tips off the rib racks. Then I cut each rack in half just to expedite the defrosting. The rest of the rib prep was just rubbing them down with my basic salt, black pepper, onion and garlic powders. I placed the ribs in a large plastic bag to marinate until the fire was ready.
After the rib preparation, I went back out to the pit and spread the fire out, cleaned and oiled the grill down and readied everything for the ribs. Just before I slapped the ribs down on the hot grill, I oiled it one last time and starting cooking.
Time was a little after 10am. I thought I would have plenty of time for this. Ribs are normally only about an hour long grill time for me. The case of ribs filled up my entire grill. The fire was still a little too hot so I raise up my grill just enough so that the right amount of heat was hitting my ribs. Love my grill. I basted my ribs with olive oil and freshly squeezed calamansi lemons as they cooked. We have the lemons in our garden. 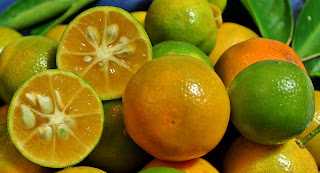 What's great about calamansi lemons is they are not as overpoweringly tart like the regular yellow lemons. Great flavor for BBQ and grilling. 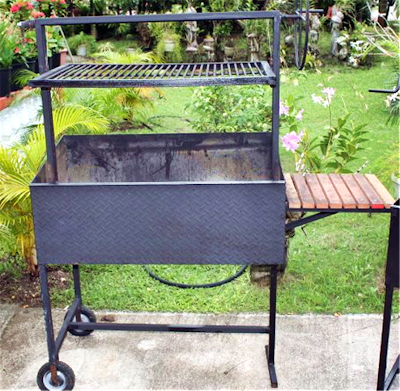 My Santa Maria-style pit (B-Pit) by made by my Son-In-Law, Barry Quinata, Umatac, Guam 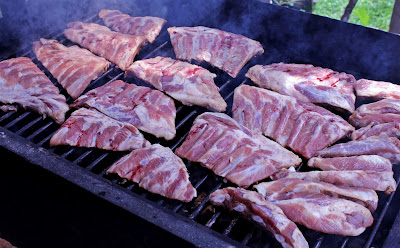 Ribs on and cooking nicely. 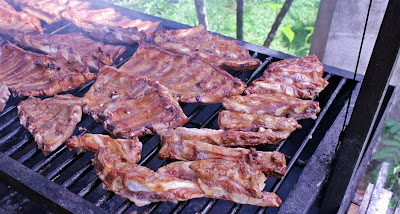 Ribs are just about done.
Well, when it was all said and done, the ribs were cooked, packaged and ready for delivery by 11:20am. Lupe was waiting and she made the delivery.
Yep, BBQ'd Spare Ribs from Zero to Done in less than 3 hours!!! That's my story and I'm sticking to it.
Just another beautiful and fun grilling day on Guam.
Until next time....
Posted by Rueben at 10:52 AM

Those look great Rueben. I have to try some direct heat ribs for sure. That is how I made them as a kid. Going to try the lemon touch for sure. Too bad we can't get those here...

Thanks for the visit and comments Bill. I love low and slow ribs but a one hour grill job is even better at times. Just depends on what you want. These are still very juicy and just tender enough where you still have some "pull". I typically will rub them down and overnight them in the refer.

For the calamansi lemon, if you just mix lime and the yellow lemon juices together in equal parts, it will get you in the ball park. I did a final drizzle over the top of the finished and "boxed" ribs.

Lupe told me they didn't last long. By the time she got through the chow line, the ribs were gone. I think the volunteers were just hungry as hell!!!

Thanks for the tip on the lemon lime mix. How do you think key limes would work?

Bill, I have never tried Key Lime other than the pie. But why shouldn't it work right?? What you don't want is a tartness that may overpower the meat. Leave that up to your taste buds!! I would love to try it out. When I go to Cali in November, I will give it a whirl.