Well, BBQGuam recently just hit it's 10,000th visitor. And that honor is bestowed upon one of my BBQ buddies from the Netherlands, Freek Haan, of Freeks BBQ.  Check out his site and see how they do "it" in the Netherlands!!!
My site has only been up since March 21st of this year and has been slowly gaining in popularity. The visitor numbers have been increasing quite rapidly lately. It is also interesting to note that I have had 95 different countries visit BBQGuam. It's been fun.
So......that being said congrats again to Freek and I will be sending him a quart-sized zip-loc plastic bag of my Rueben's Rub. It's the least that I can do. 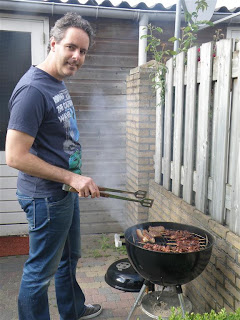 Email ThisBlogThis!Share to TwitterShare to FacebookShare to Pinterest
Labels: Visitor

Thanks Rueben, I'm looking forward to your Rueben's Rub! It was just a coincidence that I was the 10000th visitor. Today we had a BBQ "meating" with the guys, we had a blast. I think the way we "do it" in the Netherlands is quite the same as in Guam, important is to have lots of fun, good food and good company! Thanks again and greetings from your friend from Holland :-)

You got it. You are so right about having fun, good food and good company. But you forgot one other very important aspect of BBQing. You have to practice the three (3) "B"s....Beer, Beer, Beer!!!
And I am sure you do. HaHa!!

You are so right Rueben, I did forgot that, haha
Cheers mate!