Made on Guam Grill featured on the Barbecue Bible Web Site!!!!! 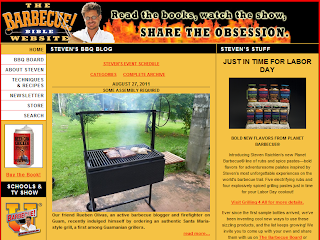 Wow....talk about exciting. My bbq grill, one that my son-in-law Barry Quinata fabricated and gave to me this past week, was featured on the infamous Barbecue Bible web site. Now that is super exciting news!!!
If you are not familiar with the Barbecue Bible web site, just let me fill you in a little. This site belongs to the BBQ Guru himself, Steven Raichlen. Steven is a multi-award-winning author, journalist, cooking teacher, and TV host. Steven Raichlen is the man who reinvented barbecue. His best-selling Barbecue Bible cookbook series (4 million copies in print) and The Primal Grill and Barbecue University™ TV shows on PBS have helped people all over the world ascend the ladder of grilling enlightenment.
So we are feeling very honored that B-Pits were showcased on his famous web site. And this special post would not have been possible without the help of Steven's super talented special assistant, right-hand gal, and producer Nancy Loseke. Thanks so much Nancy! As we say on Guam, "You are the bomb!!!".
I guess this officially marks the birth of the only Santa Maria style barbecue pit fabrication business (hobby now, business later) on Guam. This would be a true Guam made product. And what could be a better representation of Guam cuisine than barbecue? Right?
Mark my words people, you will be hearing a lot more from B-Pits of Umatac, Guam.
The business, tentatively known as B-Pits of Guam, will build custom pits to suit your specs as long as the basic design is that of Santa Maria style BBQ pits. This style is simple, a large fire box with a roll up grill. 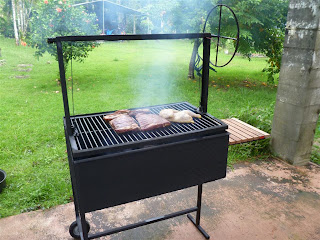 The first B-Pit
Plans for tailgater trailer hitch pits, tow pits and just about anything in between are on the table. Barry is building another pit right now. Response on Guam has been awesome!! 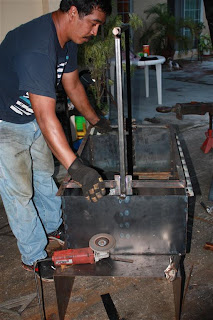 The master checking the tolerances. 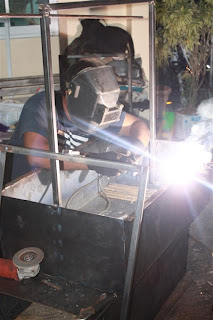 Barry likes to play with fire!!
B-Pits, the brainchild of the master fabricator, Barry Quinata of Umatac, Guam, is a family operated hobby, soon to be business. These Santa Maria style BBQ pits will be carrying on the world-famous Santa Maria BBQ legacy right here in Umatac, Guam.
So buckle your seat belts and hang on for the ride because this party has just begun.
Until next time....
Posted by Rueben at 7:51 AM

Congrats Rueben!! That sure is a honor to be on Steven's site.
You're the bomb

Thank you for the congrats Freek. I've been lucky.

This is my second time. I also have a few recipes in his "BBQ USA" book.

One thing about Steven is that he is very down to earth, as well as his assistant, Nancy Loseke.

Give my regards to the BBQ Pitboys Oss.
-Rueben-

You mean that a few recipes in the "BBQ USA" book are yours? If so, please tell me on the site numbers of the book.
Maybe Steven can give you some advise how to put your rubs on the market.
I want to be mentioned on Steven's site too!!
:-)

Freek, I sure do. And there are a number of recipes on pages 392 and 661 in Steven Raichlen's book, BBQ USA. As a matter of fact, there are over 400 great recipes and stories in this book.

Oh, I know how to market my rubs but it is a matter of time and money. I retire soon so my goal is to get the rub in the market within the year.

Thanks for checking. Talk at you soon.
-Rueben-

Nice to see one of my peeps getting some acknowledgement for his accomplishments. If there's anyone who knows about grills, it's a Chamoru!...Awesome job!

You got that right Chelu!!!!
If you see Francis Santos over there, tell him the guys from Guam Fire send a big Hafa Adai!!
Esta!!!