The theme for this year's event was, "Towing the Line to Save Lives". This is an annual American Cancer Society fundraiser. The entry fees alone this year brought in over $20,000. There was food, various displays and info booths set up inside the huge VQ-1 aircraft hanger along the flight line on Tiyan. The event was well attended. I would estimate the crowds to be in excess of 2000 people.

In the plane pull competition itself, more than 40 teams went head to head for the best time. The competition was ferocious. Everyone gave it their all.

All the teams came out winners. They contributed towards winning the fight against cancer. It was a great time for a great cause.

There was only one BBQ set up due to the limitation on vendors. But these guys were busy all day. Here are a few of their pics: 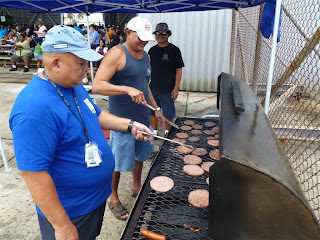 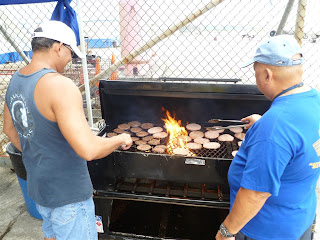 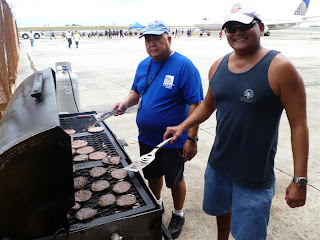 Ike and Tim striking "the pose". And I have to let all you single women out there know that Tim is single. He insisted that I let everyone know. Ok Tim, I said it!!!! 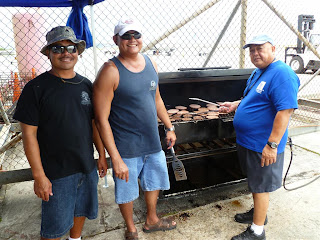 The guys told me their day is just starting out. That pit is gas and great for roasting whole hog.
More pictures for this event are available to view at this web link: https://picasaweb.google.com/rueben.olivas/ACSPlanePull9Apr2011?authkey=Gv1sRgCLrtmvmQ8fiBcw&feat=directlink

We look forward to next year and we are working on having more than just one BBQ vendor. We are going to try to work in a fundraising BBQ competition.

Email ThisBlogThis!Share to TwitterShare to FacebookShare to Pinterest
Labels: Fundraiser

What a great cause! Looks like a fun time too..Thanks for sharing your pics! :)

Cowgirl, it really was a great time for a great cause. There were a lot of people there supporting this event. It gives one hope.