Considered one of the jewels of southern Guam, Jeff's Pirates Cove is the perfect place to stop and fill up your "tank" and knock down a few refreshing "cocktails" at the same time. A popular tourist attraction, Jeff's also is considered one of the top cultural centers on the island. But the locals know it for being one of the best BBQ eateries you will find anywhere.
Here are a few pictures to help you get acquainted with Jeff's Pirates Cove down in Ipan, Talofofo, Guam. 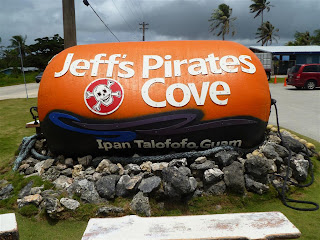 A Guam landmark, you can't miss Jeff's when driving through Ipan, Talofofo. It's marked well. 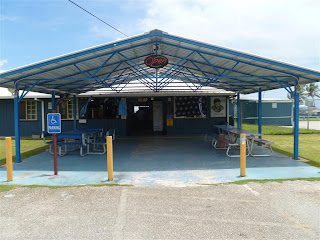 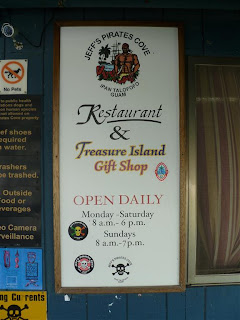 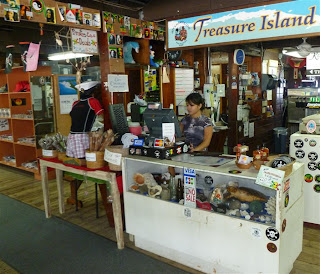 Once inside you are in the gift shop. 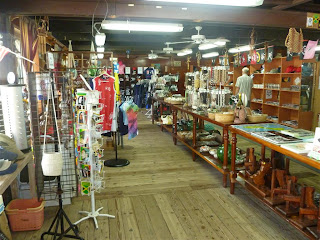 Jeff's gift shop. You can find anything the prospective pirate needs. 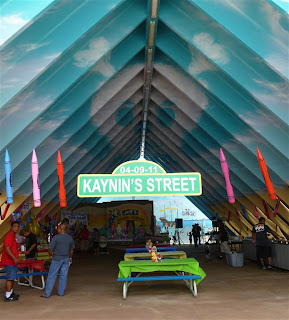 The concrete A-frame party pavilion. Always available for special occasions. The "Pirate" is always watching over you.... 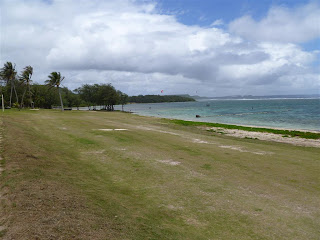 Part of the beach area at Jeff's. 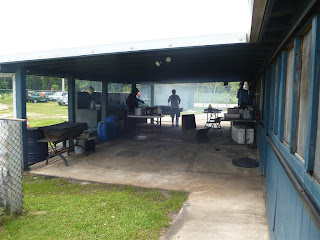 BBQ area at Jeff's. This is where the "magic" happens. 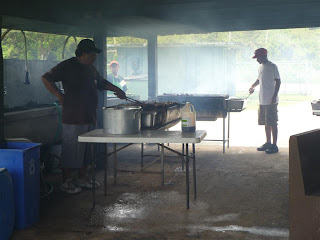 The boys are always busy BBQing 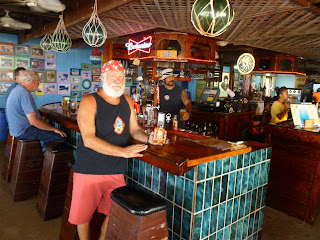 The pirate himself, Jeff Pleadwell, inside his bar and restaurant. Jeff has been the proprietor of "The Cove" since 1979. This establishment is a very popular local, military and tourist destination. Jeff loves to party and plays host to many weddings, large beach and birthday parties, concerts, company events and more. 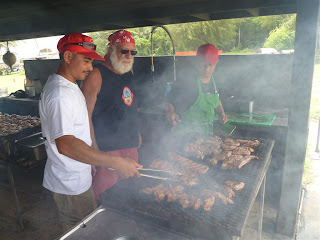 Jeff hasn't lost touch with his roots. He is hands on especially ensuring quality control over his fantastic, legendary BBQ'd pork spare ribs and chicken. 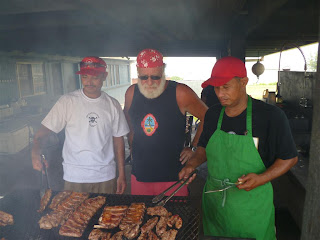 Jeff with his pork spare ribs crew, Lot on his right and Barnie on his left. 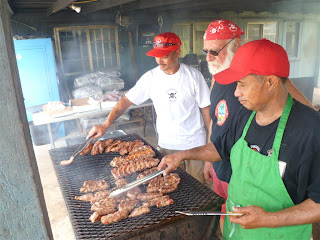 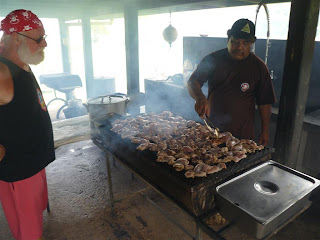 Jeff and his ever faithful main BBQ guru, Lickie. Jeff told me that Lickie as been with him way too long.....about 10 years (I hope he was joking). Jeff told me he is "the man". I personally know that these guys can BBQ all day long. Now that is what I call "hang time". 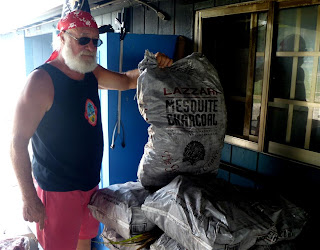 Jeff's secret, besides his mysterious and finger licking good marinade, is that he exclusively uses quality mesquite charcoal. 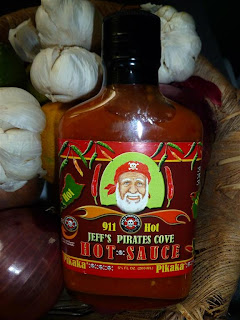 What can I say, Jeff even has his own hot sauce. Now that's hot!!!!
These few pictures and comments do not even come close to giving Jeff's Pirate's Cove it's due. It is a legendary destination on Guam. Many military personnel have called Jeff's their home away from home. There is a fairly even mix of local, tourist and military patrons.
Here is the official web site for Jeff's Pirate's Cove:
http://www.jeffspiratescove.com/
Going to his web site is truly an adventure. Explore it. It is fascinating. Kind of like "The Pirate" himself.
The Guam Food Guy was quoted as stating: "It's hard not to be captivated by the awesome majesty of the Pacific Ocean and it's infinite expanse, especially when viewed from the vantage point of the Pirates Cove beachfront."  To read The Guam Food Guy's full review, click on the following link:
http://www.guamdiner.com/reviews/review.php?review=68
This really explains the cuisine better than I ever could. All I know is that when you eat here, you better have room to expand that waistline. Your tank will be full when you leave.
Give him a call the next time you are in the area, 671-789-2683, or better yet, just stop by. You won't regret it.
And don't forget to visit the Jeff's Pirates Cove Blog at http://jeffspiratescove.blogspot.com/.
Until next time....
Posted by Rueben at 5:48 PM

Email ThisBlogThis!Share to TwitterShare to FacebookShare to Pinterest
Labels: Restaurant