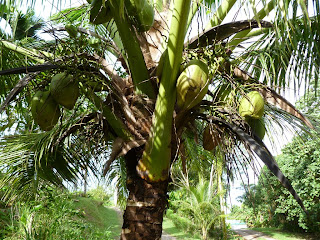 Coconut milk is the basis for many tropical cuisines throughout the world, particularly in the Asian and Island communities. It can be used for soups, curries, pastries such as pies, cakes and cookies. Coconut milk can also be used for  many health and beauty aides.
But I use it for cooking plain and simple. And one of my favorite dishes is BBQ'd fresh reef fish such as parrot fish. Then I sautee onions and garlic in a large pan, add coconut milk and the BBQ'd fish and cook this until everything is warmed up. Serve this over white rice and garnish with lemon finadene. This is a meal you won't soon forget. The flavor of the BBQ and enhanced with the coconut milk soup plus accented with the lemon finadene.....ouch. This is killer. 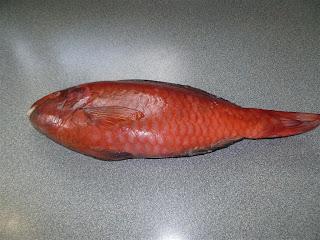 Parrot fish from the reefs of Guam. This is about a 4 pounder.
So let's make coconut milk.
First you need a coconut tree. I have a few on my property that I planted years ago. 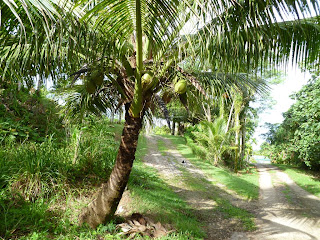 Here is one that I harvested a few coconuts on this fine morning. This tree still has many green coconuts not yet ready for this use. Green coconuts, depending on their age, have various uses. 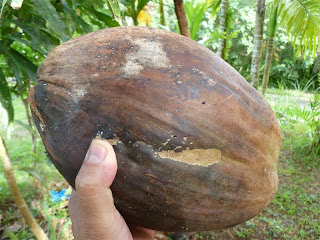 For coconut milk you want a coconut that has turned brown and has already fallen from the tree. And when you shake it, it should still have liquid inside it which is coconut water. 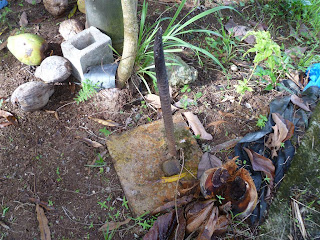 Now we need to "husk" the coconut. This means we are going to peel off the outside of the thick skin, husk, and expose the inside nut or coconut. The tool that we use is called a "heggao or hehgao" in the local native language of Guam, "Chamorro". This is traditionally a thick pointed stick or branch but here is my heggao made of rebar. This is used to pierce the thick coconut husk and pry it away from the nut. 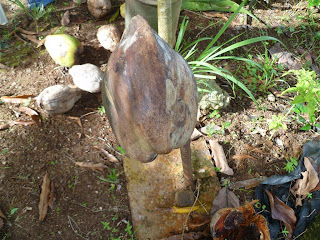 Here I have pierced the coconut on the tip of the rebar "heggao". 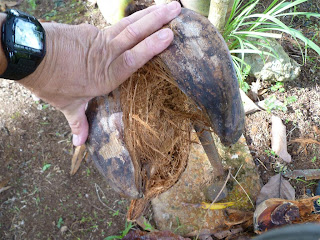 I am prying the thick coconut husk away from the coconut which is now exposed. 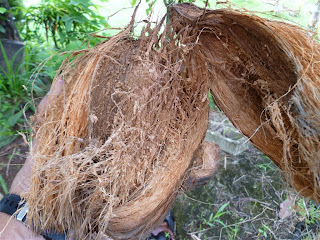 Here is the exposed coconut. 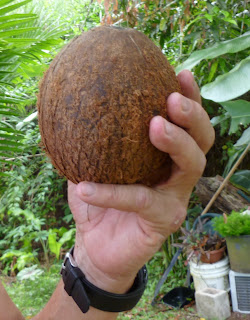 I have husked the coconut and here is the nut. 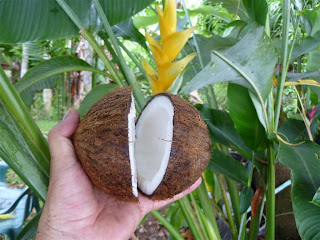 Now I have to crack the nut. I do this with my Chamorro Machete. I tap it around the centerline of the coconut as I turn the nut one complete rotation until it cracks in half as shown here. When I did this, all the coconut water was released. I caught this in a bowl and I drank this somewhat sweet water. It is quite refreshing. 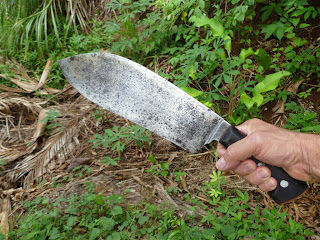 This is my "Chamorro" machete custom made for me by Guam's master blacksmith Joaquin Lujan. I use this for just about everything from cutting small trees, cutting large pieces of meat to digging holes for planting in the yard. It's 17 inches long with an 11.5 inch blade. Very thick and sturdy. This machete is 24 years old. It's a serious piece. 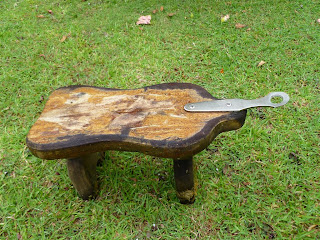 Once the coconut is halved, it is now ready for grating out the coconut meat from the nut. We use another tool for this called a "Kamyo" or coconut grater. Here is one made out of stainless steel mounted on an Ifit wood stool. Ifit wood is native to Guam and is highly resistant to rot and termites. It lasts a long time. 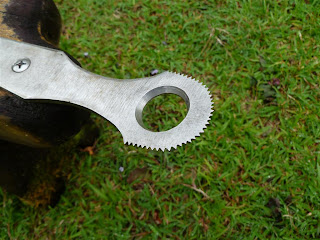 Close up of my stainless steel "kamyo". The "y" is pronounced like a "j". 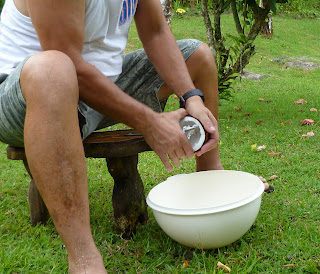 I am sitting on the kamyo, rotating the inside of the coconut scraping the meat against the teeth of the kamyo, thus grating the coconut meat. The meat then falls into the bowl. 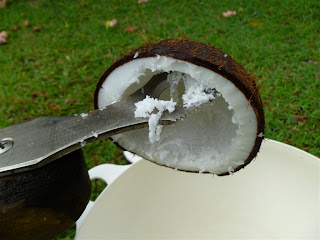 Close up of the grated coconut on the kamyo. 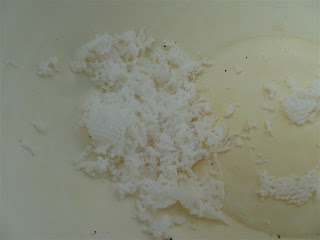 This is the grated coconut that has fallen into the bowl. 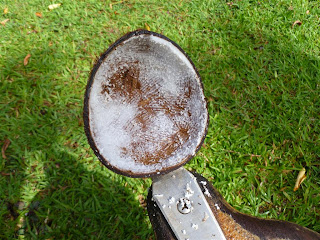 View of the inside of the coconut once it has been grated. My mother-in-law would not want to see any coconut meat left inside the shell like this one. Nothing should be wasted. 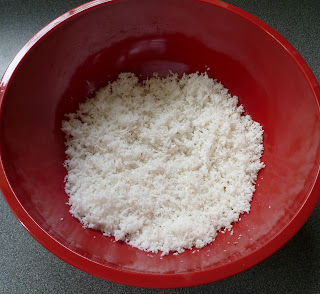 The grated coconut meat from just one coconut. We would husk many coconuts for the cooking of dishes for a fiesta. This task is usually relegated to the youth. 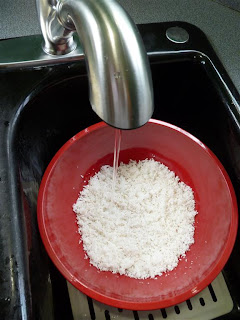 Now we add a little water so the we can mix it with the grated coconut meat. Here I am now squeezing the water with the grated coconut milk. This slowly extracts the oils and juices from the meat. I use two hands for this operation but at the moment the other hand is taking the picture. You would squeeze this over another bowl and set aside the squeezed coconut pulp for another squeezing that we refer to as the 2nd squeeze. 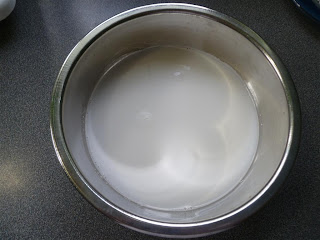 After you work over the squeezing of the coconut meat, you then strain the liquid, milk, and you have the finished product, coconut milk. I was able to get about one quart of milk from the one coconut.
I would like to mention that there are two steps to the squeezing of the coconut milk. The first squeeze is the thickest and it is set aside for use at the last part of the cooking. The second squeeze of the same coconut meat or pulp, is when you use the pulp left over from the first squeezing, add more water to it and then re-squeeze the pulp. This liquid, milk, is thinner then the 1st squeeze and is used as the liquid that you would cook your dish in. When everything is cooked, you then add in the 1st squeeze milk for the finishing.
The reason for the two different squeezes is that the first squeeze milk has a lot of the coconut oil in the liquid and if you use this during the entire cooking time, the coconut oil will separate from the milk and ruin your dish. 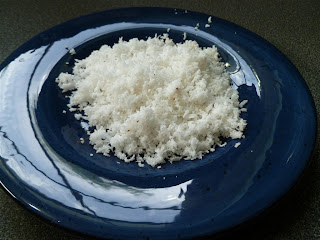 Here is the leftover grated coconut after all the squeezing. You can use this to make coconut candy.
And that is the method that my wife's family uses to obtain coconut milk from fresh coconuts. I have found, having lived on Guam for 26 years, that this is the most common method used. I have seen a few other methods used, to include using electric graders, food processors, blenders, etc. but the method I have shown is fairly traditional.
I hope you found this interesting. And one thing is for certain, you cannot beat the flavor of fresh coconut milk in any dish. Nothing beats fresh.
Until next time....
Posted by Rueben at 4:21 PM

As a girl growing up in Fort Lauderdale, Fla., we cracked many coconuts. Our parents wouldn't dare let us use a machete (though my dad had one for camping trips, etc.). Instead, we used a claw hammer and screwdriver.
Thanks for posting this!

Jan, thank you for visiting my blog. I am glad that my post was able to take you back in time. My parents would not have let me use a machete either. But a hammer works. Just don't give my wife any ideas. Ouch!!