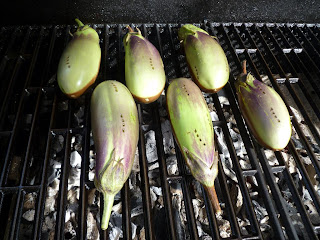 On Guam, we grill just about anything. We don't need any excuses to grill or BBQ (as we refer to grilling). But one of my favorite dishes to prepare and eat are BBQ'd eggplants in coconut milk or as we say in Guam's native language of Chamorro, Lechen Biringhenas.

Here is a link to an article about this dish in Guampedia: http://guampedia.com/lechen-biringhenas-barbecued-eggplant-with-coconut-cream/#toc-images.

Here is my version on how I prepare this BBQ dish....

First you need to pick the eggplant you are going to use. We use the oriental variety on Guam. It is the most prevalent type and, in my opinion, they are tastier than the large, round purple type that I was so used to in the States (like the Black Beauty type).

I chose a purple/green variegated variety because that is what is in season right now. 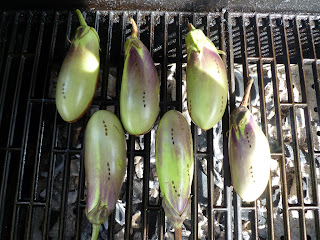 You wash them down, poke a few holes in them (so they don't burst while grilling) and arrange them on your oiled down grill as shown above. 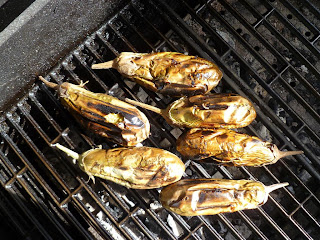 BBQ the eggplant until the skin is slightly charred and is easy to peel off. You can do a "test peel" on the eggplant while still on the grill. If the skin separates from the "meat" easily, its ready. Place the cooked eggplant in a pan and allow to cool. 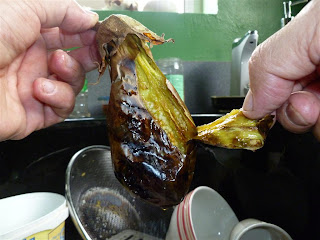 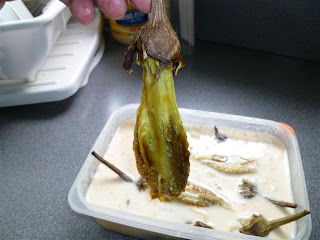 Place the eggplant in the coconut milk mixture.
For table presentation, you can transfer everything to a bowl. When placing the eggplants into the bowl, smash the eggplants a little and arrange the stems to hang over the edge of the bowl.
A few notes on the coconut mixture. This mixture is basically lemon finadene with the addition of coconut milk. Here is a link to to the finadene recipe: http://bbqguam.blogspot.com/2011/04/lemon-finadene-guam-bbq-dipping-sauce.html.
The recipe, for ease of those who have never made this before, is 3/4 cup of freshly squeezed lemon juice and one can of coconut milk (14 oz.). I love it a little lemony. You may want to tone down the lemon. Just add this adjustment to the lemon finadene that I have linked you to. You can elect to leave out the tomatoes (I do) and you can use yellow, white or red onions. Whichever you like. Everyone has they own special mix. But this will get you in the ballpark. And traditionally on Guam, real coconut milk is freshly squeezed from grated coconut meat. I will show this process on another post.
You can make your adjustments on the amounts of lemon, salt and hot pepper to your taste as you put in each ingredient. I would put in the lemon juice second to last and the salt at the very last. Some folks add the hot pepper at the end. But traditionally you will have the tartness of the lemon blended along with the salt as the prominent flavors. Of course the coconut milk will enhance everything.
Once all the eggplants are in the coconut milk mixture, chill until you are ready to serve. 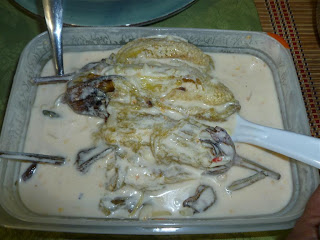 I think this is ready for my wife and I right now!!!!

The smokiness of the eggplant from the BBQing really adds to this dish. You would not get this flavor if you baked the eggplants or cooked them over a gas fire. Of course all you BBQers know this.

I know you will love this dish and after a few times, you should have everything down to your individual taste.

I love to give parties and it's in my habit to try different type of recipes for bbq. I have to try your recipe and hopefully I won't screw it again like I ruined the last one which I picked from the TV.
recipes for bbq

Well, first of all, thanks for the visit to my blog and your comment. I think the recipe and pictures of the step by step should get you pretty close to success. But any questions shoot me an email @ rueben.olivas@gmail.com.

Several of my favorite flavors, all in one dish! It's been many years since I lived on Guam, but I am absolutely going to make this soon. Thanks Rueben!