My friend and co-worker, Fire Captain Solomon "Sal" Monteverde, is quite the prolific fisherman and hunter. He also told me that he has a whole herd of wild pigs coming down close to his place where he feeds them fresh coconut practically on a daily basis. This is really unheard of here on Guam. Wild pigs stay away from humans as they are running around with big bulls-eyes on their backs. But Captain Sal provided this amazing video.

As you watch this, remember, these are wild pigs. Also a couple of Guam terms you will hear:  Balaku-mature male pig,  Balaka (slang)-mature female pig. And the young man feeding the pigs is Captain Sal's son, Warren, as Captain Sal narrates the video. 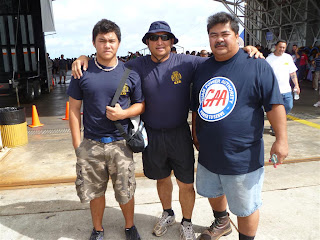 Great video Rueben.. That is amazing!!

I thought it was amazing also. My friend Sal and his son must have good Karma to have befriended that pack of wild pigs. I have never seen anything like it before.