Rotisserie Chicken on the Menu

Got my daughter and her husband coming over tonight for dinner. This happens every Tuesday night. But being a Firefighter, I work every other Tuesday. But when I am off, I BBQ. What else is there really if you have the time.

I mean cooking outside in great weather and not having to worry about getting a kitchen all durtied (my own word) up and just enjoying the time and company is the only way to go. Now that's SINIMPLE!!!!

So being that it is Tuesday and I am off I'm am going to thrown down some rotisserie chicken rubbed down with a cilantro pesto, served with a nice pasta crab salad, grilled French cheese bread and a little dessert yet to be determined. Probably some BBQ'd pineapple slices in coconut milk.  My wife loves this menu but my daughter and her husband have not tried it yet.

I will do my best to remember to take pictures.

Here are some pics on one that I did on a gas (I know) pit: 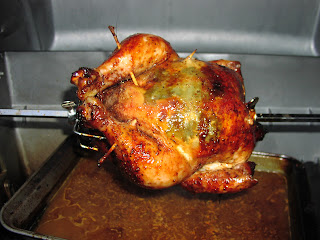 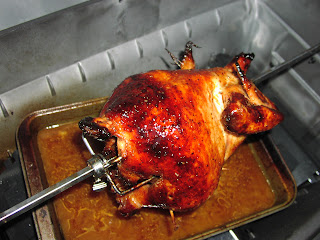 It was very tasty. I just don't use the rotisserie enough.

Well as I continued on with the BBQ, now later in the day about 3pm, I put my plan into action. The plan was a good one but the execution.......not so good.

You see my rotisserie mounts were on my old gas BBQ pit. I went to remove them in order to install them on my Charcoal pit but they were rusted on. Duhhh, after 4 years I guess they would be. So I sprayed the nuts and bolts down with WD-40 and went to plan "B". That's right, plan "B". B for BBQ!!!! I just took that whole chicken that was all set up for turning and cut it right in half and just grilled it.


First thing I did was rub down the whole chicken with Rueben's Jerk Rub (that's me). For the recipe, click here:  http://guamfirehousecook.blogspot.com/2011/05/ruebens-jerk-rub.html
Then I made a cilantro pesto by cutting about 1 cup full of cilantro leaves, 1/4 cup of virgin olive oil and 10 cloves of garlic and blended them all together using a bullet blender. Then I rubbed the pesto under the breast skin onto the breasts and inside the abdominal cavity. 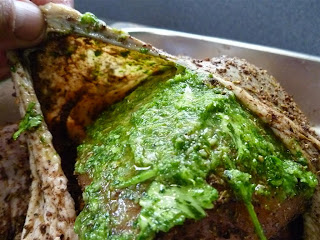 Then I bamboo skewered this all together as you can see below. 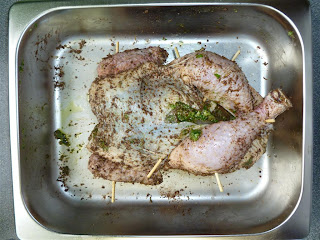 Now the chicken is all ready for the rotisserie. But on this particular day, as I mentioned above, it was just not meant to be. So I cut the chicken in half and BBQ'd the halves. 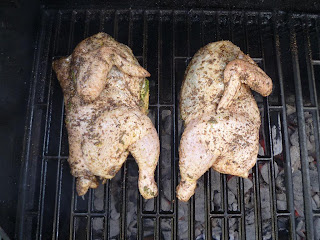 Everything came out just fine. The BBQ got done and no one starved to death. And guess what happened? Everyone needed help getting up off the table. Just like last week!!!! It seems to be a habit now.

Oh, I almost forgot. We had grilled pineapple slices served with homemade whip cream whipped up with a touch of pineapple juice and vanilla extract, then drizzled with a little more vanilla. Here are a few pics: 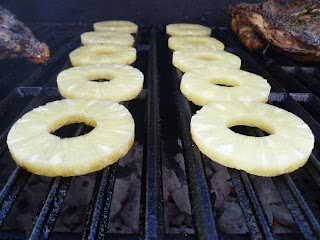 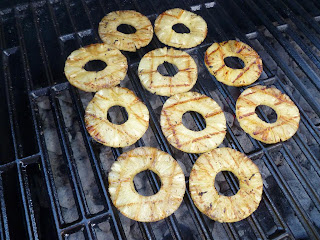 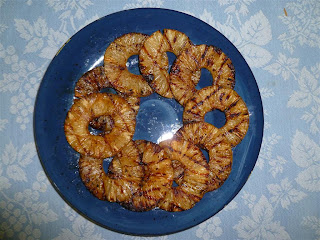 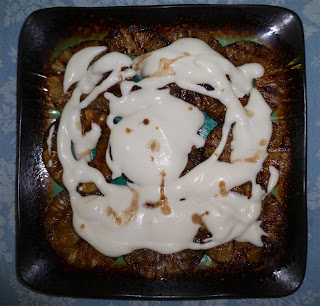 As you can tell, I am not one for picture perfect presentation. I was too in a hurry to eat this.

Though the original plan of BBQ'd rotisserie chicken did not happen, I recovered and BBQ'd it instead. Oh well, I can think of worse things that could have happened.

Looks excellent Rueben! You are such a talented chef! Love the color on that bird, and your pineapple looks to die for. :)

Cowgirl, you are always so kind with your words. The cilantro pesto BBQ'd was delicious on the chicken. The jerk seasoning was different and offered another adventure. With the pineapple, it was a nice and light dessert.

Reuben, your posts and pics are inspiring. Keep it up you old Devil Dog!

Coshon, glad to see that you made it over.

That chicken was Huli Huli style from Steven Raichlen's DVD. Man, that recipe is great for the rotisserie.

I went to your web site and I left a comment. But I love your set up and of course the content.

You guys have got some serious skills.